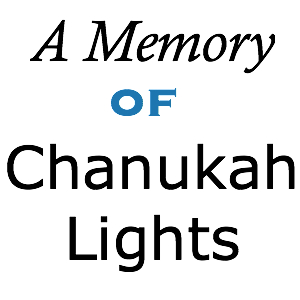 Our Chanukah lights are now a sweet memory but thanks to Rabbi Chaim (Brothers for Life- Achim L’Chaim), sends a historic Chanukah photo and shares its special message.  Rabbi Chaim writes:
At first glance the photograph below looks almost quaint, an old black and white of a Menorah somewhere in Europe, sometime in the 1930’s. Look closer for a moment and it will become clear, this is not a Menorah lighting, this is act of hope and open defiance.
In a moment of prescience, Rachel Mansbach wrote on the back of her photograph the following words: 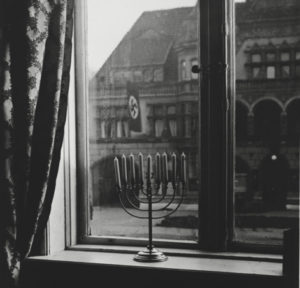 Though the pain of the Holocaust was worse than anything imaginable, the swastika banner has been relegated to the shadows of history, while Menorahs were lit in millions of Jewish homes all over Israel and around the world.

Look again at this photograph. There could not be a more meaningful contrast to the swastika than the light of the Menorah. A person takes their light, shares it with the person next to them until their flame is lit, then returns to light up the next one. Instead of their own light being diminished, the world grows brighter from the giving of one’s self to another. The Mitzvah of the Menorah, like the Jewish People, is not in it’s size, rather in the purity of it’s light. A life about quantity will be empty, a life lived with quality will have endless depth. In truth we are not lighting candles, we are lighting the essential values of Judaism.

This may look like a Menorah in the photograph but it’s so much more. It’s the Hope of the Jewish People. Rachel and her husband, Rabbi Akiva Posner, made it out of Germany and lit the same Menorah every year, and never with more gratitude than the sacred Chanukah of 1948, in the new State of Israel. Ten years ago her great grandson Akiva took the Menorah as an IDF soldier and lit it on his base surrounded by his fellow soldiers.

At Chanukah 2016, 84 years after Rachel took the photo, it was lit by her descendants in Beit Shemesh.