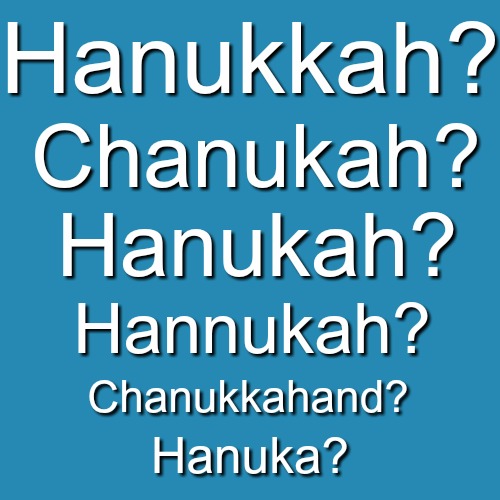 OK, So How Do You Spell the Jewish Festival of Lights?

Chanukah is an unusual Jewish holiday because it is the only one of our Jewish festivals that does not appear anywhere in the Jewish Bible and of all the holidays we Jews celebrate, Chanukah, with its eight days of festivity is the longest of them all.  But that’s not its only surprising fact. Chanukah is also the only Jewish holiday where more than 16 different spellings of the word exist worldwide.

Starting with journalist Jeremy Blachman in 2004 who began studying the spelling phenomenon, to Journalists Joe Maller and Tim Newcomb (2017) who have continued the search for its definitive spelling, these stalwarts have assessed, through internet hits, the most popular spellings for the festival of lights.

Maller says that where the spelling of the festival is concerned, “with the exception of a few wildcards, there are 16 different spellings, based on four phonetic variations: the “H” or the “Ch,”  the “nn” or the “n”, the “kk” or the “k” and then ending of the word, with either the “ah” or the “a.”

Still confused?  Maller goes to report that at his daughter’s “pre-school Hanukkah party, there were three different spellings within 10 feet of one another!”

But, Dahling, not to worry. Here is Tim Newcomb’s 2017 list of the most popular spellings for the festival of lights, And the winner is…

Even though I’ve grown up with “Chanukah,” I’m supporting Tim Newcomb who says, “ I’m going forward with “Hanukkah” which is the preferred spelling used by the Library of Congress.

But, thankfully, at least in Hebrew, the holiday is always spelled the same!  חֲנֻכָּה.  But no matter how you spell it, enjoy what has become one of Judaism’s most joyful and most popular of our Jewish celebrations!