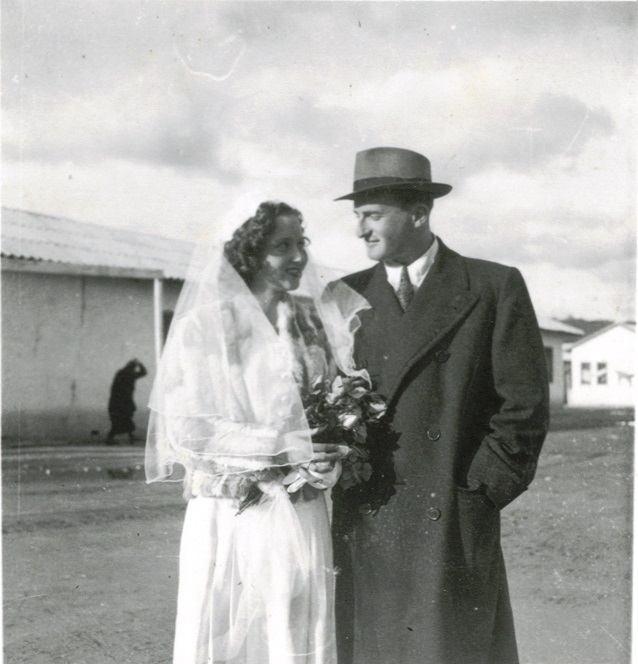 A wedding gown fashioned from a bed sheet and a veil crafted from mosquito netting – these were shared among the 24 Jewish brides who married under the chuppah in, of all places, a WW II Concentration Camp.

It happened in southern Italy at the Ferramonti Concentration Camp where two rabbis who were also camp inmates officiated at the weddings that were held in the camp itself from its establishment in June, 1940 through September, 1943 when the camp was liberated by units of the British Army as they advanced northward through Calabria.

When they weren’t officiating at wedding ceremonies or naming one of the 21 babies born in the camp, the rabbis were leading Shabbat and festival services in one of the three synagogues that operated freely within the confines of concentration camp itself.

“It is a little known story that needs to be told,” says Simona Ciliberti, administrator of the Ferramonti museum, which boasts an extensive collection of artifacts and photographs that offer visitors a glimpse of camp life – a life that included a Hebrew school, a camp newspaper, social organizations, family vegetable gardens, a drama society, soccer teams and the three synagogues – orthodox, reform and Zionist.

Inspired by a New York Times article by Ralph Blumenthal, (9/21/19) “An Improbable Relic of Auschwitz: a Shofar That Defied the Nazis,” that featured the moving story of a shofar that was secretly sounded at the Auschwitz death camp, it seemed that the remarkable story of the public sounding of the shofar at the Ferramonti Concentration Camp was an event that needed to be highlighted and replicated.

On Saturday evening October 6, 2019, seventy-five years after the Rosh HaShanah and Yom Kippur services that were held openly at the camp, the shofar sounded again – this time in recognition of and in gratitude for the Italian soldiers and local villagers who supported and protected the Eastern European Jews and Jewish Pentcho survivors who comprised the Ferramonti prisoner population.

“If Jews could worship in the Ferramonti camp, then we should demonstrate just what they were doing,” said Angela Yael Amato, concert violinist and board member of Congregation Ner Tamid del Sud, a synagogue located near the camp that serves southern Italy as the first active synagogue in Calabria in 500 years. Along with her son, Alessandro who is an award-winning cellist, Ms. Amato arranged and performed traditional music that would have been played at the camp wedding ceremonies. The program concluded with the duo’s moving performance of the Kol Nidre melody and Avinu Malkeinu, musical selections that are among the most familiar of High Holy Day melodies.

Serving as Ba’alat Tekiah, I had the honor of sounding the shofar. As the long low blasts filled the meeting hall, many guests were moved to tears. We sensed that each of the shofar’s four distinct tones represented a celebration of life, love, courage and the religious freedom afforded nearly 4,000 inmate Jews seventy-five years ago.

“Nothing can absolve Italy from its unholy alliance with Hitler,” said Caterina, a young mother who brought her two children to participate in the reenactment of the original Ferramonti High Holy Day services. “But the world must know that even though Italy’s leadership aligned with the devil, the villagers who lived here would not permit any harm to come to the Jews.”