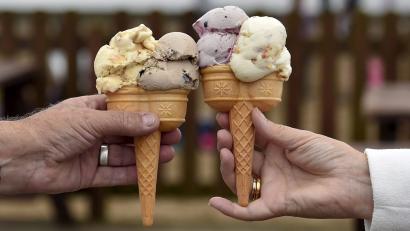 It’s the season to enjoy summertime’s favorite treat – ice cream. It’s cool, it’s delicious and it’s Jewish! Thanks to an article by Joan Nathan (Tablet Magazine) we can start by introducing Reuben Mattus who began his career in the ice cream business in the 1920s when he was only ten years old. That’s when little Reuben and his widowed mother, Leah, landed in America. They met up with an uncle who made a living in Brooklyn’s lemon ice business and gave mother and son a job.

This was before the invention of the refrigerator and Ruben Mattus recalls,  “In those days, we bought the ice from the Great Lakes in the winter and buried it with sawdust in pits in the ground until summer,” which is how Mattus was able to made ice pops, chocolate covered ice cream bars and ice cream sandwiches, too.

Reuben Mattus married fellow Polish immigrant, Rose Vesel and together with his mom they perfected their ice cream recipe. While Rose developed marketing strategies, Ruben set out to create a business name – one that would give them notice and set them apart. That’s how these Polish Jewish immigrants created their company name, Häagen-Dazs!

Mattus was inspired by Jewish history. He knew that one of the few countries that actively saved Jews during World War II was

Denmark, so to honor Demark’s courage Mattus created a totally fictitious Danish name and had it registered. When he was asked about it Mattus said, “Häagen-Dazs doesn’t mean anything. [But] it would attract attention, especially with those two little dots, the umlat over the “a”!”

Later it was Steve Herrell and his Jewish wife who opened Steve’s Ice Cream in a renovated dry cleaner’s near Boston. In those days most ice cream shops sold only three flavors – chocolate, vanilla and strawberry. Steve added mix-ins like M&M’s, peanut butter and Heath Bars and business was booming – so much so that two nice Jewish boys, good friends, Ben Cohen and Jerry Greenfield, stopped by to watch Steve make his ice cream creations. They were impressed – so much so that in 1978 in Burlington, Vermont Ben and Jerry’s was born. So on these sweltering hot days when ice cream hits the spot, we can thank Ruben and Steve, Ben and Jerry – a fabulous foursome that represent ice cream’s Jewish connection. Enjoy!