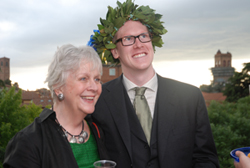 Even by American standards Antonio Talarico is tall. Standing at well over six feet,  Italian-born Antonio, now twenty-five years old, was the tallest in his graduating class at the Universita’ di Magna Grecia, the only institute of higher learning in Calabria, Italy, in the “toe” of the Italian “boot.”  As a neighbor, close friend and longtime ex-pat resident of our village, when Antonio invited me to his Italian Graduation Day, I was delighted and my expectations were probably similar to most Americans. I assumed that the ceremony would be the usual mix of motivational speeches, congratulations and the general hoopla common to graduation festivities back home. Instead, what I saw astounded me and gave pause for reflection on what’s happening in our colleges and universities in the United States.

Back to Antonio, who by now is surrounded by a gaggle of parents, relatives and friends as he tugs absent-mindedly at the sleeves of his too-small suit jacket. The ceremony is about to begin. We know this because proctors are passing baskets to collect cell phones, all the while apologizing but emphasizing that during the proceedings no photos and no conversations are allowed.

The venue itself is a lecture hall with seats arranged theater-style and complete with a head table at front where all the Business School professors are now seated.  In the front row, Antonio and six other students, all MBA candidates, shift nervously in their chairs. I flash back to the US, to ceremonies I have been a part of, both as a graduate, a parent and an interested onlooker. Music plays, students file in, speakers exhort graduates to follow their dreams, degrees are conferred amid shouts and whistles and finally, mortarboards are tossed into the air as graduates backslap each other in one final burst of enthusiasm and relief. I am about to find out that in Italy graduation ceremonies are entirely different.

Following a brief introduction a professor who is advisor to one of the potential graduates presents his/her protégé’ to the assembled colleagues. After a brief biography that highlights the student’s area of concentration, each student must now answer a question in detail before the professorial board and within earshot of all the gathered guests. Each potential grad has received a series of questions to study in advance, but the student seeking the MBA degree does not know which of these questions will be asked.

Granted, Antonio and his fellow students knew they were receiving their degrees. What they didn’t know was their ranking – a number from 80-100 – which would indicate the level to which each one had successfully answered the question. The number earned at the Italian Graduation Day would follow them, along with their “sheepskin”, to the desks of potential employers.

In addition to fine wine, delicious food and artistic treasures, higher education in Italy also holds a world renowned place of prominence. For Antonio and his Italian contemporaries, this means that Masters’candidates have had the opportunity to study in one of the most prestigious traditions of higher education in the world.  It’s called the “Bologna Process,” named for the University of Bologna, the oldest university in the Western world and it offers students throughout Italy the opportunity to combine core courses, electives, seminars and a dissertation leading to this unique graduation exercise that had Antonio and his fellow students shaking their heads and mopping their brows.

One by one the MBA graduates came forward to answer extemporaneously the questions posed by the professors. When the seventh and final student had spoken, the professors adjourned to a small alcove where they compared their evaluations and determined a final

score for each student. The silence among family and friends made the wait seem interminable. Everyone in the lecture hall seemed to understand the significance of the moment. Even the Italian children, characteristically rambunctious, were perfectly quiet.

Finally the group of professors ceremoniously entered the theater ready to announce the individual scores. When Antonio’s name was announced, his parents, two sisters and three nephews cheered at the news. Antonio earned a 92.  Only one student received a perfect 100 while another barely squeaked by with an 81. But nothing could dim the smiles all around as families rushed forward, placing the traditional “laurea,” the laurel wreath, on the head of each graduate.

Amid shouts of “Bravissimo,” and “Complimenti,” I couldn’t help but wonder if the Italian graduation I’d just witnessed speaks in its own quiet way to its American counterpart. Could it be that current US college classes such as “Cyberporn and Society,”  “God, Sex and Chocolate,” “How to Watch Television” and “Is Harry Potter Real?” have led American students subconsciously to devalue their academic preparation. And if that’s true then maybe the  protests, sit-ins and petitions against a university’s choice of a commencement speaker are merely symbolic temper tantrums – the logical conclusion of an academic process that doesn’t mean very much anymore.

My take-away from the Italian commencement is not only the memory of a beaming Antonio, his head wreathed in laurel leaves, standing tall  above the crowd,  but the awe with which he and his fellow students approached the academic process – a process that continued up to and including the graduation ceremony. As an outsider looking in, it occurred to me that we Americans could learn something from the academic rigor that culminates in the Italian graduation ceremony. With less pomp and more circumstance, Italian graduations are less about celebration and more about expression, demonstration and verification of what one has learned. In Italy the “Bravissimo” seems uniquely well-deserved.