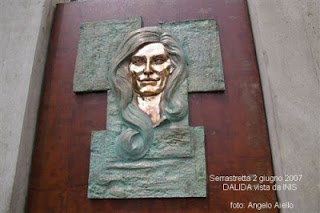 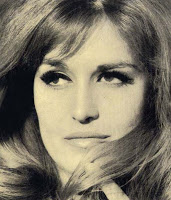 Although she was born Iolanda Cristina Gigliotti, when it came time to select a stage name, she chose “Dalida`,” from the Hebrew for “delight.” And, as Dalida` she became one of the world’s most beloved performers, singing and recording in more than ten languages, including Hebrew.

What is Dalida’s Calabrian Jewish connection?  Her parents, Pietro and Giuseppina were born right here in Serrastretta with the surname “Gigliotti,” a local name  recognized as Jewish  from Inquisition times. In addition it was  “nonno Enrico,” Dalida’s grandfather, who professed Algerian Jewish roots – all of which lead to Dalida’s place of honor in the hearts of Calabrian Jews and of B’nei Anousim everywhere.

Dalida’ was born in Egypt after her parents settled there, a move they made so that her father could pursue his career as a concert violinist. Dalida’ spent her early years in Egypt’s bustling Italian Egyptian community, but she lived most of her adult life in France.

Dalida’ career spanned 30 years with a debut in 1956 and a final recording in 1986, just months before her untimely death. Known throughout Europe and Asia for her sultry voice and thoughtful lyrics, Dalida` is credited for bringing the first ethnic fusion hit to the contemporary music scene. “Salma ya Salama,” based on a traditional Egyptian folk song, was translated into French, Italian and German and sung around the world.

American appreciation of Dalida’ soared after her critically acclaimed Broadway-themed show at Carnegie Hall in New York City, but we Serrastrettesi remember her for the concert she brought to her home town in the 1970’s.

Dalida’s performance of Hava Nagila earned her acclaim early in her career. When asked about why she chose a Hebrew melody, Dalida’ told the audience that the melody was in her blood.

This year the Serrastretta community remembered Dalida’, an Italian Jewish Singers, on the 25th anniversary of her death. Our local cultural society, “Associazione Dalidà,” offered a concert in an outdoor theatre that bears her name and special museum exhibit at Casa Museo Dalida`

As the Italian Jewish Cultural Center in Calabria continues to discover and establish our ancient Jewish presence here in the south of Italy, we are honored to claim the beloved Dalida’ as one of our own.