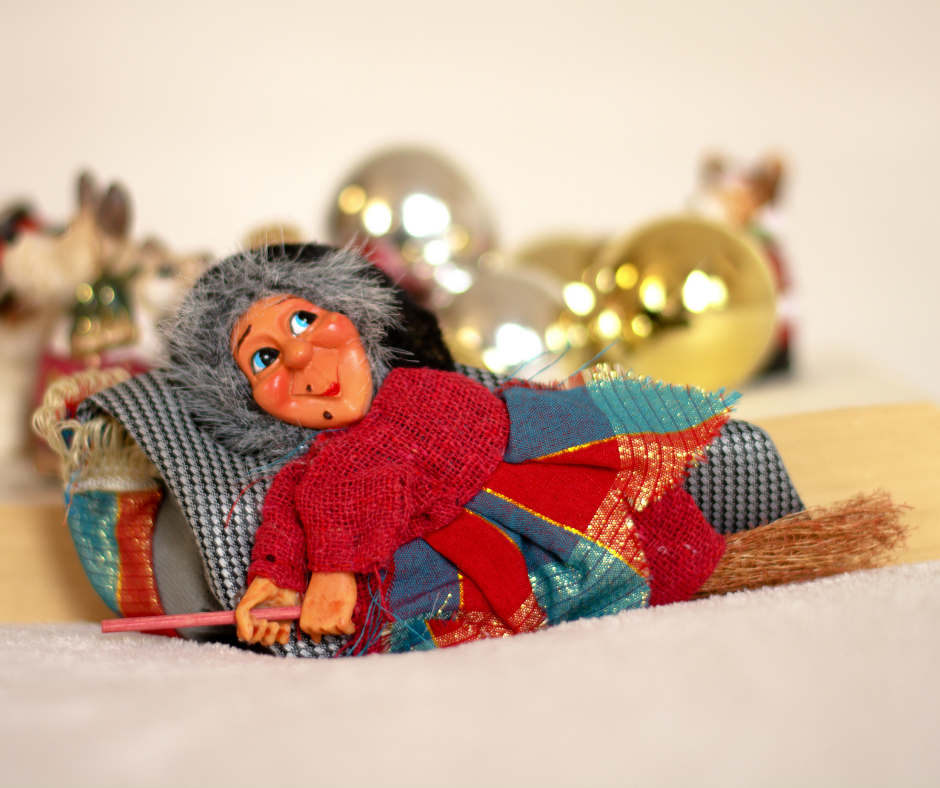 On the night of January 5 children throughout Italy and in particular in Calabria, hang their stockings from the fireplace mantle or place their shoes by the bedroom door, all in anticipation of a beloved old lady who will slide down the chimney or squeeze through the keyhole to bring gifts to the sleeping boys and girls.

Her name is “La Befana,” which could be derived from the Greek word, “Epiphany,” a Christian holiday that marks the arrival of the three kings who brought gifts to the baby in Bethlehem. But over the years La Befana has taken on a persona all her own. For parents of all faiths and backgrounds, Befana is a special part of southern Italian folklore that includes our children in the gift giving tradition while offering a distinct separation between the religious celebration of Christmas and the arrival of a charming mythical figure.

For Italian Christian families, December 24, Christmas Eve includes a sumptuous meal followed by midnight mass and here in Calabria, elaborate bonfires that sometimes can be seen by the space shuttle crews!

Christmas day is spent with friends and family, sharing traditional foods, homemade wine and once-a-year sweets like “pignolata” and “torrone.” But in a historical maneuver that would make many a rabbi proud, the “sacred” portion of the holiday is separated from the “profane” in that the religious aspect is distinct from the material world of exchanging gifts.

Here in Calabria there is no Santa in the local mall, no photos on Santa’s knee, no visit from a robust, red-suited grandfatherly figure on Christmas Eve. For us it’s an impressive 12 days after the religious holiday when La Befana, our diminutive “Bubbe,” dressed in a peasant “shmata,” flies from house to house on her broom bringing the long awaited gifts to the kids. Thanks to La Befana, children of all faiths and ethnicities can comfortably enjoy the anticipation of what has become a secular tradition. Everyone can easily join in the fun.

The name Befana appeared for the first time in 1549 in a poem by an Italian Florentine author, Agnolo Firenzuola. Later it was Shakespeare’s comedy, “Twelfth Night” that celebrated the night of January 5 as the most magical night of the year.

According to author Debra Thimmesch (Italiarail), “Most modern representations of Befana — seen in storybooks and as popular dolls — depict her as an elderly woman wrapped in a dark shawl, wearing a kerchief on her head, and carrying or riding a broom.”

But some historians believe that La Befana is a Christian version of the Roman goddess, Sabine – as evidenced by the lyrics of a popular children’s song where Befana is described as “col vestito alla Romana” or dressed “in the Roman style.”

Ms. Thimmesch goes on to say that Befana is not the “bad witch”, like Hanzel and Gretel’s nemesis. Instead Befana is an engaging character with a ready smile and a good heart who is dedicated to protecting little boys and girls.

Here in Calabria, for nearly 500 years parents have reminded their children that Befana rewards good behavior with toys and treats while, in a nod to the modern-day “Elf on a Shelf,” naughty behavior brings onions, garlic or chunks of coal.

In the peasant culture of Calabria and Sicily this night was a time to make predictions and forecasts for the coming year while family elders recounted fantastic stories of years gone by.

As midnight approaches, parents cart their little ones off to bed, but not before setting out a plate of La Befana’s favorite snack – smoked fish, pickled onions and a glass of dark red wine – a surprisingly Jewish treat for an Italian cultural ikon that families of all faiths can appreciate and enjoy.