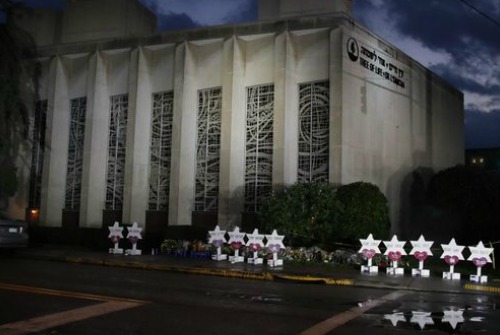 A Pittsburgh-born Rabbi’s Thoughts on the Pittsburgh Massacre

It started with pennies. At first my dear friend’s teenage daughter didn’t take it seriously.. After all, the boy who was throwing pennies at her couldn’t even get the insult right. “He’s calling me a KITE,” she said. “That’s how stupid he is. He doesn’t even know that he’s supposed to be calling me a Kike.”  As a Jewish mother my friend’s reaction was swift. She met with school administrators who offered supportive comments but exempted the perpetrator from consequence, even one as benign as in-school suspension. Like the pennies, the incident was swept under the rug.

Rewind the tape sixty years and I am a little girl of ten walking home from school with my friends. We pass a brick wall and standing on the ledge are several teenage boys. It is a warm April day and nearly the start to what used to be called Easter break. The boys on the ledge, rocks in hand, began to pelt me, and only me, with the rocks. “This is for you, Jew girl,” they shouted. “This is because you Jews killed Jesus.” In an instant a rock grazed my forehead and the blood began to flow. At that my girlfriends fled the scene and I stood there crying and alone.

As my father cleaned and bandaged the wound, I said, “Daddy, I know you were a soldier and your killed Nazis. I didn’t know you killed Jesus, too!”  My European father,WW II vet and Holocaust resistance fighter, was stunned. Years later he spoke of that day and how he couldn’t believe that in America such a thing could happen to his child. I recall him saying, “This is why we left Europe – to escape anti-semitism. I couldn’t imagine it happening here.” Yet it did.

My father also called the police and the boys were brought up before a judge in ‘”Juvi court” who threatened them with a trip to Morganza, a juvenile reform school outside of Pittsburgh. Back then, In the shadow of the Holocaust, often there were consequences for anti-semitic behavior.

So what happened in the years between my experience with the bully teens and my friend’s daughter being pelted with pennies?  During the intervening half-century anti-semitism went underground. Growing up in the fifties, I recall that it seemed socially unacceptable to engage in public Jew-bashing, possibly because there were social consequences for doing so.  People in charge took anti-semitic behavior seriously, probably because the Holocaust was a fresh memory and most of society had not forgotten what attacks on Jews could lead to.

As the years passed, with the exception of the Jewish community, less attention was paid to the horrors of Nazi Germany. As our eye witnesses to death camp atrocities either passed on or became too frail to travel and speak, the Holocaust, along with most of its anti-semitic precursors receded into the background of public discourse.

What filled the gap? While Holocaust discussion was falling out of fashion, a newer, trendier subject took its place. Holocaust memorial services and commemorations expanded to include hate crimes and genocides of all kinds. In recent years I have participated in programs on two continents that are  publicized as Holocaust commemorations but where the subjects discussed included the Armenian and Rwanda massacres, school bullying, Kosovo, Syrian refugees and most dangerous of all, the lie that distorts Israel’s self—defense of its people to the point where it is called “genocide” against Palestinians.

In fact, earlier this year when I was asked to lead a Holocaust memorial event, I was interrupted by a professor of Islamic studies who encouraged his students to raise their fists and chant “Niqbah,” the Arabic word that means “catastrophe,” that refers to the establishment of the State of Israel.  Not one of the organizers even attempted to steer the gathering back to its intended topic.

This experience forced me to acknowledge that the unique horror of the Holocaust is systematically becoming diluted with myriad other issues. As the Holocaust fades into the background of public discourse, bigots like the Nation of Islam’s outspoken leader, Louis Farakkhan, who recently referred to Jews a “termites” who must be “exterminated,” and Linda Sarsour one of several leaders of the Washington, DC women’s march who routinely exhorts audiences not to “humanize” the “sub-human” Jews, spew their anti-semitic hate with impunity.

When spokespersons like Farakkhan and Sarsour, among others, are not called out for their anti-semetic hate speech and instead are featured speakers at mainstream public forums and supported by companies like Ben and Jerry’s who are donating to their organizations, is it any wonder that the teens who observed their classmate targeted with pennies and taunted as a “Kike,” averted their eyes and did nothing?

In 2015 on the 70th anniversary of the liberation of the Auschwitz death camp, 300 camp survivors attended the ceremony, the majority of whom were in their 80’s and 90’s.  When the 75th commemoration is held in 2020, very few survivors will still be alive, and those still with us may be too frail to attend..

As we lose the testimony of our eye witnesses who experienced Nazi horrors first hand, we Jews must consider how we will maintain our educational programs and memorial ceremonies.  Will we seek out child survivors, such as those who were hidden or abandoned or who escaped via the Kindertransport? Will we validate childhood memories and consider child survivors as “real” Holocaust survivors?  Will we listen to the children and grandchildren of camp survivors whose lives have been forever affected by the horrors their parents and grandparents suffered? Or will we take the path of least resistance and homogenize the Jewish Holocaust experience with other worldwide tragedies?

As journalist Seth Frantzman warns, “In recent years there has been a tendency to revise the history of the Holocaust. In the West this takes the form of universalizing it and diluting its meaning.”  My experiences here in Italy and in the US tell me that Holocaust dilution, well-meaning though it may be, eventually will diminish the Jewish Holocaust experience. By marginalizing the anti-semitic events that led to the murder of six million Jews, society will have provided an opportunity for a new crop of anti-semites to thrive. Add social media to the mix which we know often encourages hateful behavior and it’s the Pittsburgh massacre somewhere else, all over again.

This article first appeared in the online journal, Times of Israel, Nov. 2018