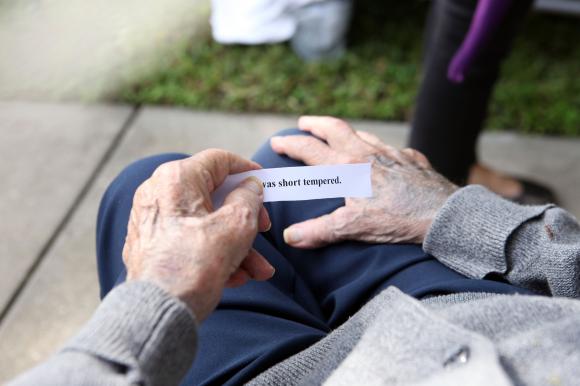 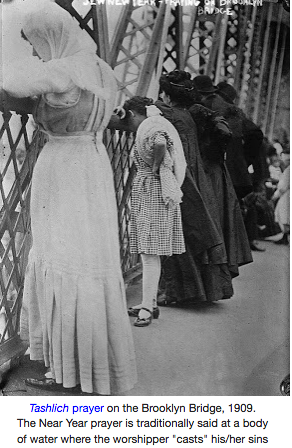 Back in the day, on one of the first two days of Rosh HaShanah, Jews traditionally walked together to a stream, pond, lake, river, or even an ocean. The idea was to find a body of flowing water, preferably filled with swimming fish, so that we Jews could throw away our sins. That’s the meaning of the Hebrew word, tashlich – to cast off or throw away.

The Tashlich ceremony itself, which includes psalms, readings and the actual tossing of bread crumbs to symbolize our last year’s sins, originated in the 1200’s. It quickly caught on in Jewish communities around the world, to the chagrin of many rabbis who were afraid that tashlich superstitions would become more important than the more solemn themes of Rosh HaShanah, such as forgiveness and teshuvah (return).

So what happens at a Tashlich ceremony? When the group arrives at the flowing stream, they gather close to the water. Then, after psalms, readings, prayers and poetry, we Jews  empty our pockets of their crumbs – crumbs that become tangible symbols of the sinful things we’ve done in the past 12 months.

Prophet Micah’s words provide the tashlich theme; “God will take us back in love and cover up our iniquities. God will cast all of our sins into the depths of the sea.”

On the Kobernick campus in Sarasota, Florida, where I serve several hundred Jewish seniors, we’ve created our own version of the ancient Tashlich service. Although we begin with readings and psalms, ( Psalms 18 and 130 are traditionally appropriate), we offer suggestions as to the specific sins that need tossing out. For example, we read a list of trangressions that include:

These sins and many others are written on small slips of paper and as they are read, residents decide which sins apply to them. 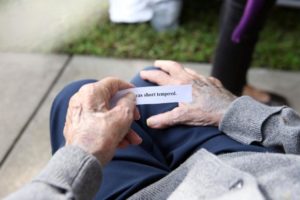 Volunteers distribute the appropriate sin to the resident who requests it, including the all-purpose general sin, “I did something wrong but I don’t want to say.”

With sins in one hand and fish crackers in the other, we take our “fishy sins” to the water and do the tashlich – we literally throw them away.

In her book, “Celebrate! The Complete Jewish Holidays Handbook,” author Lesli Koppelman Ross notes that many historians believe that ancient superstitions influenced the popularity of Tashlich, probably because “primitive people believed that the best way to win favor from evil spirits (who) lived in waterways, was to give them gifts.”

Koppelman goes on to say that there were communities, “including the Babylonian Jews, who sent ‘sin-filled’ containers out into the water.”  She writes that the Talmud records an ancient practice where Jewish families wove baskets for each child in the family. The baskets, filled with beans or peas representative of last year’s sins, were held above the head, swung around and then tossed into the water, a practice that still continues in Southern Italy to this day! 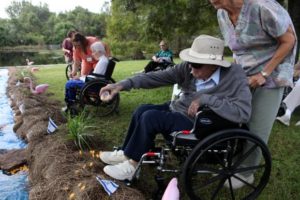 It was Prophet Ezekiel who received God’s guidance near a body of water and throughout Jewish history our heroes and sages have felt God’s presence beside lakes and streams, rivers and wells. Whether it’s history or folklore, in recent years tashlich has become a popular Rosh HaShanah ritual as well as a special time for families to gather, “toss” and nosh. Our Kobernick, Anchin and Benderson residents have had that same opportunity as our very special tashlich ceremony goes a long way to bring hope and a fresh start to the new year. Shanah Tovah!