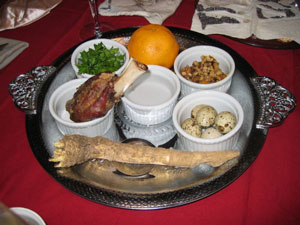 New Passover Traditions Arise As We Celebrate the Changing Role of Jewish Women:

Beginning in the mid 1970’s when the first woman rabbi was ordained in the Reform movement, modern Jews have expanded the role that women play in Jewish culture, tradition and observance. Changes have taken place on the bima where most synagogues now welcome women as service leaders, Torah readers, cantors and finally, rabbis. At home, around the Shabbat table, men as well as women light the Shabbat candles and now many women make the Kiddush blessing over the wine.

During Passover, the festival that Francine Klagsbrun (Jewish Days 1996) describes as “the most widely celebrated of all Jewish holidays,” new traditions have made their way onto the seder plate and on the Passover table.  Two in particular, the orange and Miriam’s cup, highlight the contributions women have made to Jewish life.  As you plan your seder, consider making these part of your own family Pesach traditions.

Slice an orange and place it on your seder plate. (Note:  there are wide varieties of Seder plate styles and designs. Newer ones include a special place for the orange slice.)

The following explanation and blessing for the orange is usually offered after the “shehechiyanu” blessing and before the washing of the hands.

The Leader says: There are many reasons for placing a piece of orange on our seder plate.  One explanation comes from the feminist movement more than 30 years ago, when there was an initiative for our Jewish communities to become more inclusive and responsive to diversity.

Choose a woman or young girl to hold up the orange slice while the leader says:

“For all of those who ever felt excluded from full participation in Jewish life, we welcome you and honor you with the orange and we make the blessing:

N’varech Ya Eloheinu Ruach HaOlam, bore puri HaEytz.  Blessed are you are God, spirit of the world who gives us (a grand diversity) of fruit from the trees!” 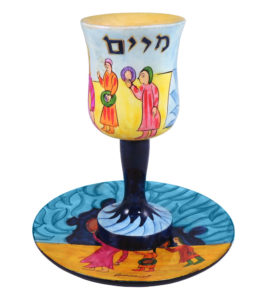 Place Miriams Cup (Kos Miriam) on the seder table next to Elijah’s cup. The following explanation and blessing can be added after the Third Cup of wine and before the filling of Elijah’s cup.

The Leader reads: The tradition of Kos Miriam originated in Boston 1981 when a group of women who participated in a Rosh Chodesh (women’s study) group decided to honor the Prophet Miriam during their families’ Passover Seder. They gained inspiration and renewal from the Mayim Chayyim (Living Waters) of Miriam’s well.

Miriam’s cup is filled with water to symbolize the miracle of Miriam’s well, which sustained the Israelites during their long journey in the desert, an event which qualified her as the first of our Jewish prophets.

Lifting the Kos Miriam honors the role she played in the Exodus from Egypt. Miriam’s cup also acknowledges her courageous and creative efforts that resulted in the rescue of baby Moses and highlights our sages’ recognition of Miriam as the very first prophet and a prophet in her own right.  Miriam’s cup emphasizes the past and present contributions of women to Jewish life.

A woman at each table holds the cup while the leader makes the blessing:

May you be blessed beneath the wings of Sh ‘china

NOTE:  Each year Rabbi Barbara organized a Kos Miriam activity for the residents at the Anchin Pavilion Assisted Living Facility.  As part of the Rabbi’s Mitzvah club where ALF residents (many over 90 years of age, some at 100 plus!) engage in Tikkun Olam service projects to do for others and make the world a better place, residents created a variety of Miriam’s cups for use on 26 seder tables. Using plastic goblets and fabric paints, the residents applied beautifully water-themed designs to the goblets. hese will be donated to Passover celebrations in our community. You can do the same to create your own Kos Miriam for your family’s Pesach table.