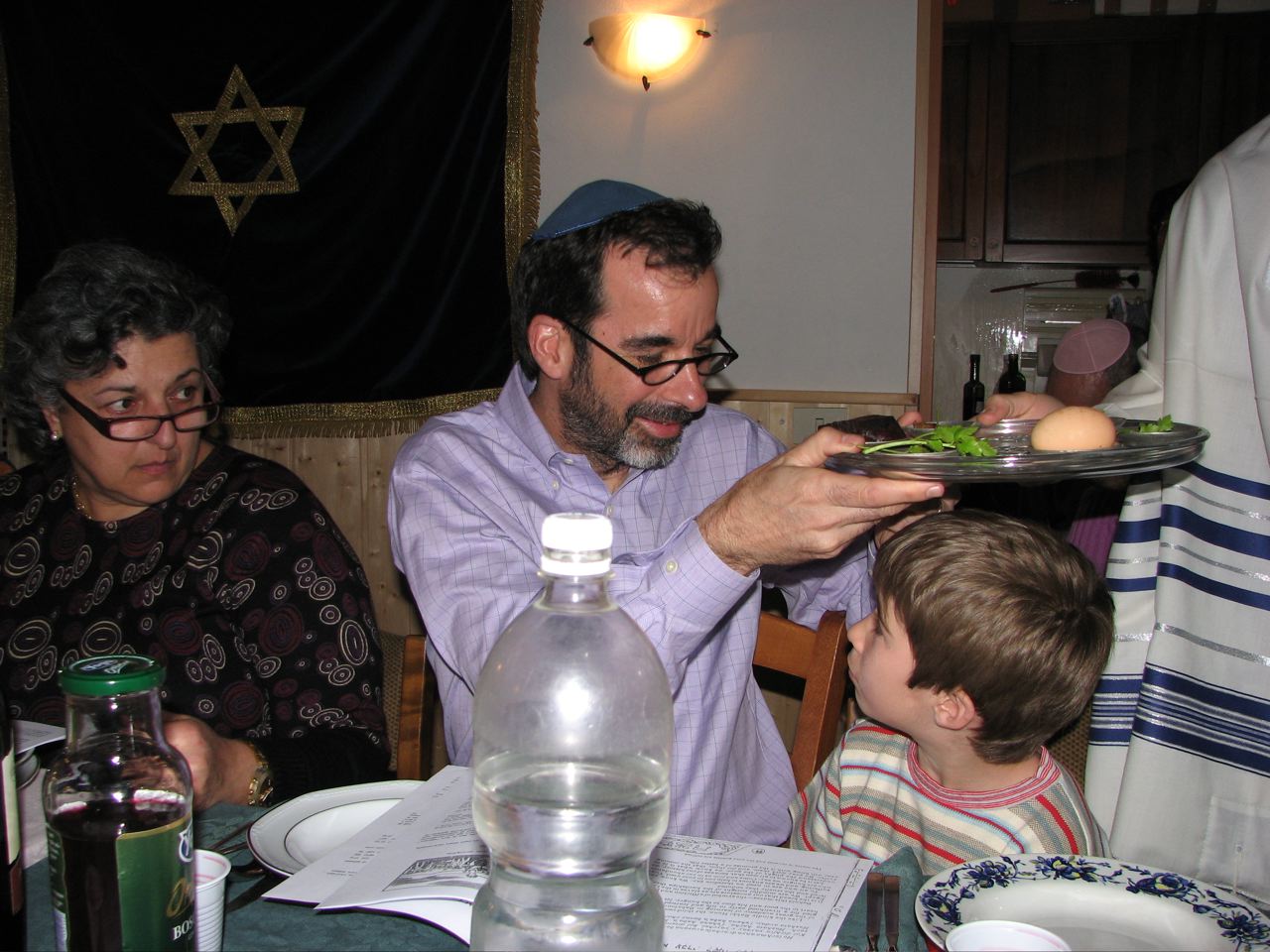 Sephardic Traditions at the Passover Seder

There is a division within the Jewish community that began thousands of years ago and continues to this day.  It is not a division between religious denominations such as Reform, Conservative, Orthodox or Reconstructionist.   The division is earlier and more pervasive – it is the division between Sephardi and Ashkenazi Jews.

The division seems odd, especially since “ashkenaz” is the Hebrew word for German.  In practice most Jews whose families come from eastern Europe, from countries such as Germany, Poland and Russia, are considered Ashkenazim.  Those whose families come from either Spain or the Arab world are called the Sephardim.  But if you meet a Jew and she tells you her last name is “Ashkenazi,” then she is most certainly Sephardi!  That’s because many generations ago one of her European ancestors went to live among the Sephardi Jews.  That ancestor was referred to as “The Ashkenazi,” and the name stuck, even though the family took on the culture and the customs of the Sephardi Jews.

Sephardi Jews – The word “Sephardi” comes from the word, “Sefarad” which is the Hebrew word for Spain.  Those of us whose background is Sephardic trace our roots to the Jews of  Spain, Portugal, Italy, Greece, Turkey, Morocco and other parts of the Mediterranean and the Middle East.  Within the group known as Sephardic, are Jews whose history is that of the anousim.  “Anousim” is the Hebrew word for “the forced ones,” and Sephardic Jews who are also anousim are Jews whose roots include having been forced into Christian practice – called  “marranos,”  — or those who took their Jewish practices into hiding – “crypto Jews.”  Interestingly, the word “marranos” is not a Spanish word but a Portuguese one, and a word which is no longer appropriate among many Sephardim.  It comes from the Ladino (the language of the Sephardi that is a mix of Spanish and Hebrew) and although it means “swine” in Spanish,  the word “marranos” in Portuguese often means “coerced one,” and comes from the Hebrew word “anous” which has the same meaning.

Seder traditions for us are an collection of practices that are Sephardic in origin, but for many of us these practices have grown and changed because they were practiced underground in either maranno or crypto-Jewish households.

Labels are for the Jelly Jars – not the Jews!

It is important to build a bridge of understanding between Jews of all backgrounds.  When my family came to America  there was a young girl from our Sephardic community who fell in love with a young man from an Ashkenazi shul.  This happened in the 1950’s and the uproar between the two families was similar to their reactions to a “mixed marriage!”

Today there are still great differences between Sephardi and Ashkenazi Jews – both in belief and practice.  But as we work to broaden Jewish Continuity and Identity, it is more helpful to focus on those things that unite us rather than those that divide us.  “Labels are for the Jelly Jars, not the Jews.”  Our sages tell us that, from a halachaic perspective, any custom accepted by a community over a significant period of time carries great weight.  If our rabbis are correct then many of our interesting, even quirky Seder traditions are not “wrong,” but examples of Jewish differences that enhance us all.

Sephardi Seder Traditions-Add These To Your Seder Table 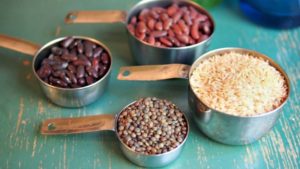 Rice is considered kosher for Pesach by Sephardi Jews.  It was a tradition among Egyptian Jews to purchase all the Pesach rice one month before the holiday.  For some families that meant that they would buy about 40 pounds of rice.  The rice would be placed in the middle of the table and the family would sift and wash the rice then divide it into eight portions for the eight days of Pesach.  Rice is part of a group of legumes known in Hebrew as “kitniyot.”  These foods are considered kosher for Passover by Sephardi Jews and include corn, millet, string beans, green peas, lentils, split peas, soybeans and chickpeas.

The Seder Plate in Morocco 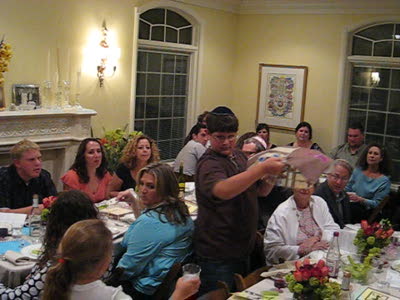 The Seder plate is brought to the Seder table with great ceremony.  It would be covered with a beautiful scarf and the family would
sing as the plate arrived at the table.  Before it was set down, the Seder plate would be placed on a child’s head and then rotated for everyone to see. 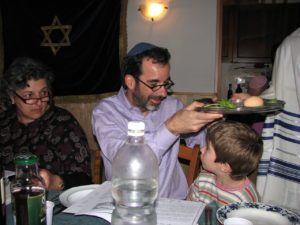 As the plate arrives at the table, the Seder leader sets it on the head of the Seder leader.  The plate is then passed from person to person around the table – held for a moment on each head by a family member.  The Seder begins in this manner to demonstrate that we were once slaves in Egypt and carried heavy burdens on our heads. 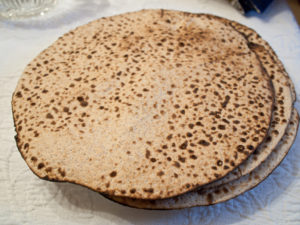 At the point in the Haggadah where the matzah is described as “the bread of affliction,” Egyptian and Moroccan Jews would have ready three pieces of matzah tied up in a napkin, like a little sack.  The sack would be passed around the table, shoulder to shoulder like this:  First the sack would be held on the person’s right shoulder and the leader would ask her/him, “Where are you from?”  The person with the shoulder sack would reply, “I am from Egypt.”  The leader then asks the same person, “Where are you going?”  Then the person with the sack would shift it to the left shoulder and say, “I am going to Yerushalayim.  Will you come with me?”  The sack is then passed to the next person at that table who says, “Yes.”  And the process repeats around the table. 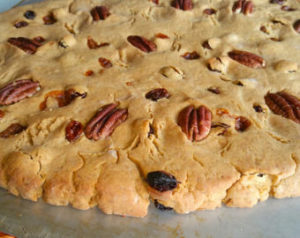 Passover bread made and eaten first by the Jews in pre-Inquisition Spain and later on by Mexicans and Mexican Americans along the Texas border.  (Note:  There are some historians who believe that the entire Caucasian population of Mexican is of Jewish origin, having escaped the Inquisition and fled to what is now Mexico. In the remote villages of Mexico many peasants observe Jewish traditions and customs without knowing the underlying Jewish basis of their practice!).  Pan de semita is always eaten around Passover season, even when families don’t understand their Jewish connection.  It is always unleavened and is made by combining two cups of flour, one half cup of water, a few tablespoons of olive oil and baked unleavened.  Mexicans says that pork lard is prohibited, hence the name, “semetic.” Only olive oil may be used. 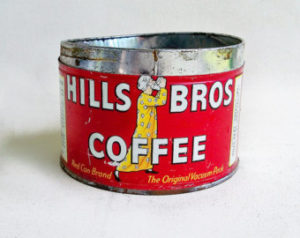 Yemenite Jews follow a custom that has become “minhag” for many of us.  As each plague is said aloud, the Seder leader would pour a little bit of wine from his cup into a tin can.  When all the plagues have been repeated, the matriarch of the family would take the tin can out into the farthest part of the yard, pour the wine into the ground and say in a loud whisper, “May this go to all of our enemies and haters.  May they create no suffering for us or for themselves.  Amen!”  Those at the table remain very quiet, so that the loud whisper can be heard.  In Greece this same ceremony is done with vinegar poured into a can as each plague is said. 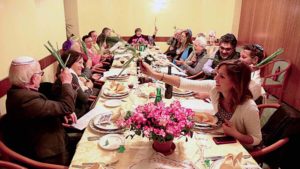 In Italy the Seder table is set with a green onion (with long stems), one for each person.  When it is time to sing Dayenu, each person takes an onion and wields it like a whip. At the chorus, each person takes the onion and whips the wrist of the person next to her/him.  The sound of the onion stems represents the sounds of the whips of our slave masters.  In Iran, Afghanistan and Iraq the onions are gathered in a bunch and one person “whips” the person next to her/him, then passes the onion bunch along.  Incidentally, this ritual is performed while singing Dayenu because Dayenu is the song of miracles, so the whipping reminds us that it was a miracle that we were freed from the lash of oppression. 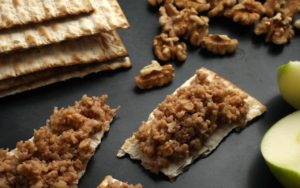 The Charoset is one of the most popular and well-remembered Seder foods.  It is part of the ritual food on the Seder plate, chosen to remind us of our lives as slaves where we had to mix mortar to make the bricks for Pharaoh’s buildings.  Sephardi charoset is often made with dates as the staple (in Ashkenazi homes the staple is apple) because the color of the dates is similar to the color of mortar.  Other Charoset ingredients include a variety of nuts, apricots, cinnamon and wine.

Charoset for Anousim or Oppressed Jews 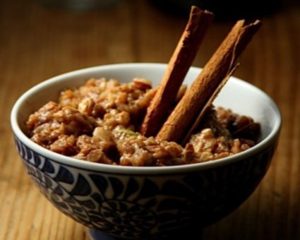 In Cuba where Jews have had difficulty practicing their religion, traditional fruits are often not available.  Apples and nuts and dried fruit were impossible to find.  So Cuban Jews created a recipe called “Charoset of the Oppressed.”  The mixture is basic and includes only matzah, honey, cinnamon and wine. Using this charoset at your Seder table will remind your family, especially the children, of the plight of Cuban Jews and all oppressed people around the world. 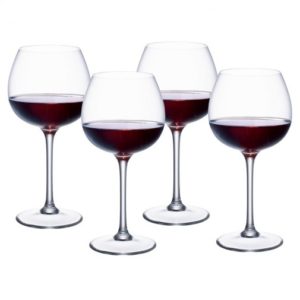 The Four Cups – In the Sephardi Seder blessings are said over the first and third cup of wine only.   According to Sephardic halacha, rabbis believe that the blessings over the first cup for the Kiddush and the third cup after the Grace After Meals covers these cups as well. 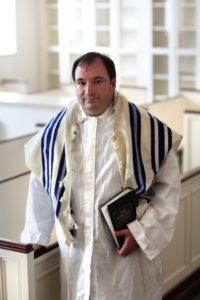 It is traditional for everyone to wear white to the Seder.  In Italian and Spanish homes, the leader will always dress in a white caftan or robe, even if the guests do not.  It is also a custom to have a crown present and to select someone as “Pharaoh.”  The Pharaoh wears the crown and during the singing of Dayenu and the “whipping” with the onions, the Pharaoh moves from table to table, supervising the whipping! 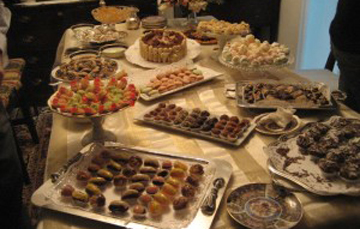 Mimouna – (“mee-moh-oo-na) is the celebration that marks the end of Pesach – There are several ways to celebrate the crossing of the Sea of Reeds and our path to freedom.  In Sephardi synagogues in Mediterranean countries, the synagogue is opened at one minute after midnight (the end of the eighth night). The Torah is taken from the ark and the Song of Songs is read while congregants dance in the aisles.  Following the Torah reading, the Mimouna festival begins. (Mimouna can also be done on the evening of the ninth day with visiting of neighbors and friends.)  The Mimouna celebration honors Rabbi Maimon, the father of Moses Maimonides who was the beloved leader of the Moroccan Jews.  Traditional Mimouna foods include pita bread, cut into pieces and eaten by dipping a piece into honey.  The meaning behind this tradition is that the pita and honey will glue the family together and slavery and oppression will never again separate us.