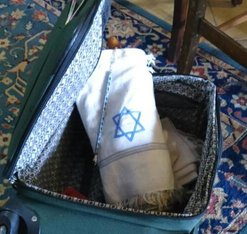 Since 2004 when I arrived here in Italy my life has been a collection of “firsts.”  First modern pluralistic rabbi in Italy, first woman rabbi in Italy, officiating at the first ever Bat Mitzvah in Rome (where a girl read directly from the Torah scroll) and then doing the same for the first Bar Mitzvah in Calabria (the deep south of Italy) in 500 years.  Synagogue Ner Tamid del Sud is located in my father’s little village of Serrastretta and it is also another first.  Ner Tamid del Sud, “The Eternal Light of the South,” and for us, the Italian anusim, it is the first active synagogue in Calabria also in 500 years.

Thinking back to all of these firsts, I am reminded that imbedded in each experience, is something very basic, very important. It is the Torah.  For in every situation where there was a “first,” Torah was there.  It was all because of Traveling Torahs that each event happened.

The first of our  scrolls is also the oldest. Inscribed in Torino (Turin) in 1783 it made its way from Italy to Jerusalem to New York to Miami/ Then thanks to a wonderful donor, home again to Bella Italia.

Our second scroll is a beauty as well. It was donated to us by a group of dedicated Florida Jews and transported with love all the way to Italy to become its own “First.”  Never before had a modern liberal group of Jews held a Torah service in an Italian synagogue. But with our Traveling Torahs providing our unity and rallying point, we were able to hold the first ever modern Rosh HaShanah service just outside of Turin, in the old synagogue in the town Ivrea.  Rosh HaShanah 2006 put us on the map and put Torah on the road.

Ki Avodat HaKodesh Aleihem Ba’Katef Yisau’” “For the holy (items of) service they shall carry upon the shoulder...” (Bamidbar 7:9)

Rabbi Binnie Friedman writes eloquently about Torah transport when she says that “there was a special mitzvah regarding the movement of The Holy Ark, which held the tablets of the Ten Commandments. The Ark was to be borne on the shoulders of the Levites, until it arrived at its destination.”

And then Rabbi Friedman asks this question.  “Why was it so important that the Ark be carried upon their shoulders?”  Maimonides offers an explanation in “Laws of the Temple Vessels.” Here we find Maimonides interpreting the verse from B’Midbar when he says:

“When transporting the Ark from place to place, one does not transport it by setting it upon a beast of burden, nor on a wagon; rather it is a Mitzvah to take it upon the shoulder.

As a rabbi who has served three Italian communities and organized three new chavurot (small emerging congregations) Maimonides’ meaning becomes crystal clear.  For all the complications, restrictions and bureaucracy of transport, our sages emphasize that the Traveling Torahs are not baggage.

And so it was that Torah had its own ticket and its own seat on two AlItalia flights, two flights on Lufthansa’s Air One, followed by a round trip on the Italian fast train, Freccia Argenta (Silver Arrow)!  Encased in a velvet cloth, then carefully rolled in that all- purpose, treasure-preserving miracle we call “bubble wrap,” Torah stood tall and proud with its seat belt fastened “low and tight in preparation for take-off.”

Now it’s 2016 and our Torah scrolls have become Jewish ritual globetrotters. The journey began in earnest when our congregation received a small, hand inscribed kosher Torah, donated by a Jewish museum director who understood how important it is to bring our traditions to remote areas of Italy – in particular islands like Sicily, Sardinia and Lipari in the Aeolian Island chain. The “baby Torah” is just that – sized to represent the length and weight of a six month old infant.  Why?  In southern France, during times of danger and outright persecution, a rabbi ingeniously commissioned a scroll that,  when hidden under a woman’s cloak, would resemble the size and shape of a a baby. With the woman cradling the scroll, the Torah might be saved from theft or destruction. 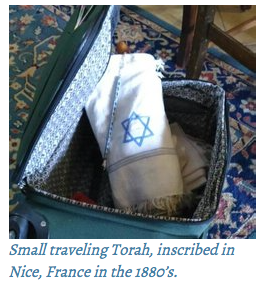 Snug in its carry-on bag, our small Torah has traveled by plane, train and ferry boat to our new island congregations as they anticipate receiving a Torah of their own.  In fact this summer (2016) donated Torah scrolls from Singapore, New York and Canada will journey to Italy to proudly serve emerging congregations in Palermo, Sicily, Nuoro, Sardinia and Matera in Puglia.

And so it was that a donated Traveling Torah flew, in seat B, Row 21, to Puglia for a Bar Mitzvah celebration and then on to Trieste for yet another Shabbat service and ceremony. When I arrived at the airport one security guard was wary. Unaccustomed as he was to our unusual “passenger,” he demanded that I unwrap the Torah to show him what was inside.  I balked.  Not two hours earlier had we carefully covered, wrapped and taped the Torah to protect it on its journey.  “Please,” I said.  “Couldn’t you make a call to a colleague who checked us in yesterday?”

“No,” he was not to be moved.  That was  until a young Carabinieri approached.  Dressed as he was in his impressive military police uniform I was prepared for difficulty.  He nodded and said, “Signora, I know what this is.  It is a Jewish Bible.”  And then, remarkably, magically, he placed his hand on what he knew to be the sacred scroll and recited, “Shema Israel, Adonai Eloheinu, Adonai Echad.” 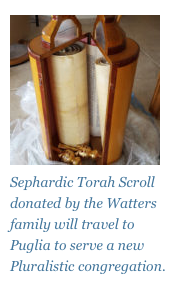 I gasped.  “How did you know?”  The young man explained that his nonna was Jewish and made sure that all of her grandchildren knew their heritage. “Where I live there is no synagogue,” he explained.  “But Nonna told us to keep our tradition here.”  He touched his heart.  After a minute’s exchange in rapid Italian, the security guard smiled and escorted me with the Torah, in my arms, against my shoulder, on board the airplane for its next flight …home.

For me this is the message of Torah transport.  Rabbi Friedman says that “who we are as a people begins with what we hold dear, and what we truly value.”  I agree. The Torah is more than a very interesting very old, hand – written manuscript.  Torah represents the mission we Jews have in this world – a mission that begins with our demonstration of the values we hold dear.  And for our emerging Jewish communities in some of Italy’s most remote outposts, Torah is our identity as a people. For those reconnecting with their lost and hidden Jewish roots, when Torah arrives it brings unity an acceptance. Torah’s presence says, “Welcome Home.”