You’re Invited To A Jewish Event 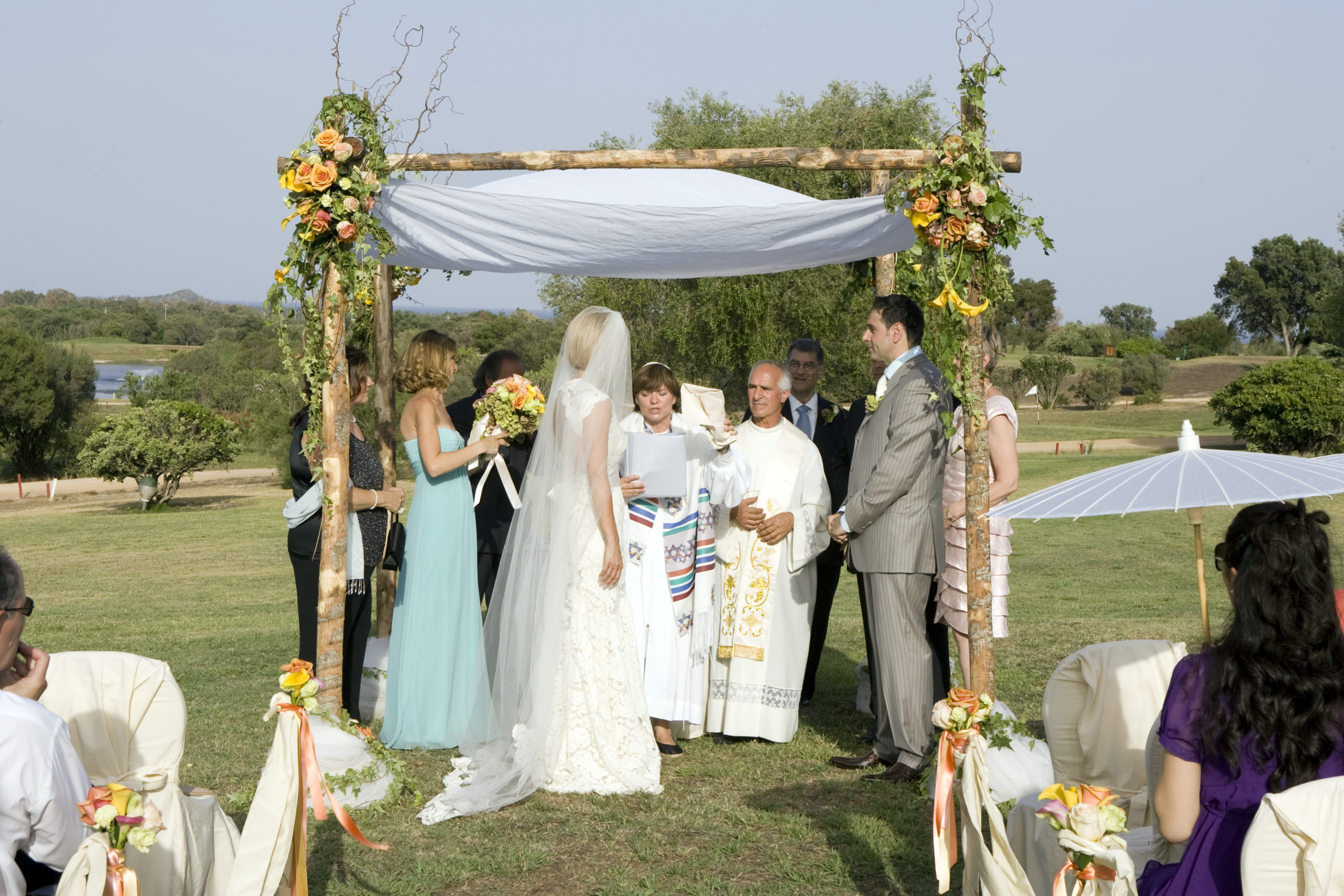 to a Jewish Wedding or a Bar or Bat Mitzvah!

What You Need to Know

Summer is in full swing and so are celebrations of all kinds. If you find yourself invited to a Jewish wedding or the Jewish coming of age ceremony known as a Bar Mitzvah or a Bat Mitzvah  there are social considerations that will make you feel comfortable and a part of the festivities.

You’re Invited to a Jewish Wedding 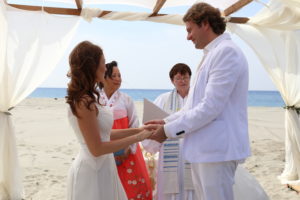 For many families, interfaith and inter cultural couples feature prominently among Jewish families and for this reason wedding couples often create a printed program explaining Jewish rituals and traditions, all in an effort to make all the guests feel comfortable and included.

When you arrive at the wedding venue, men are presented with a kipah/yarmulke to wear and in the modern tradition, some women wear them as well. For many the wearing of the kipah is optional but even if you are NOT Jewish it is a sign of respect to the bride and groom for men to accept and wear on their heads.  And, when you take a kipah, do check inside. Often the names of the bride and groom are printed inside along with the wedding date, which means that you’ll have a lovely keepsake to take home with you.

Generally the Jewish wedding takes place under a chuppah or bridal canopy with the groom walking forward escorted by both parents. The wedding party follows and as the bride approaches, also escorted by both parents, the guests rise to greet the bride.  Most Jewish weddings are 30- 45 minutes in length with the signing of the Jewish wedding document (“ketubah” in Hebrew) taking place either prior to the ceremony or under the chuppah during the ceremony.  Either way the document is often shown to the guests by the witnesses who bring it forward as the rabbi makes the ketubah blessing. 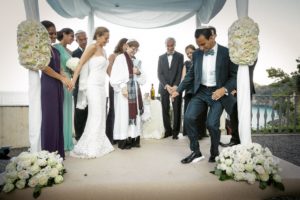 There are two important moments in the Jewish wedding. The first is the solemn exchange of wedding rings. In the modern Jewish wedding this is the moment of marriage. Another memorable moment comes at the end of the ceremony when a glass is placed under the groom’s heel and he breaks the glass.

There are many explanations for this tradition, but the one I like best is this one; For every piece the groom breaks the glass into symbolizes a year and a blessing in the couple’s married life together. That’s why as the rabbi I say to the groom,  “Break this glass into a million pieces.”  At that point, join with all the guests as they shout a hearty MAZEL TOV! When it’s time for dancing, join the circle and dance the Hora and feel comfortable that regardless of your religious or cultural persuasion, jump up and join the Hava N’gila circle because everyone is welcome to join in!

You’re Invited to a Bar or Bat Mitzvah 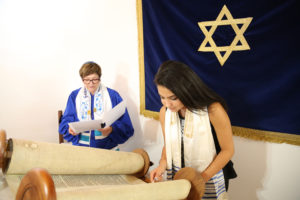 You’ll be going to a synagogue where your friend or family member’s son or daughter will be reading directly from the Torah scroll which contains the five Books of Moses written in hand calligraphy in the Hebrew language – the original language of the Bible.

If the honoree is a young man, then he is called a “Bar Mitzvah”.  The word “bar” in Hebrew means son and “mitzvah” is the Hebrew word for “commandment.”  If a young woman is the honoree, then she is a “Bat Mitzvah,” or “daughter” of the “commandment.”  These titles indicate that the young people have come of age and are take their place as responsible members in their Jewish communities

At the ceremony, most often held in a synagogue, but sometimes in another venue such as a private home or meeting room, the young man or young woman will be called to the “bima,” (A Hebrew word for the altar area) to read from the Torah scroll in Hebrew, in the original language of the Bible.

As one can imagine, reading in Hebrew is no small feat and in fact most young people have been preparing for a year or more in order to read and pronounce the Hebrew language and learn the meaning of what was read.

Like the Jewish wedding, when you arrive you will be given the opportunity to wear a kipot or yarmulke and like the Jewish wedding, it is a sign of respect for men (and in many Reform synagogues, for women) to take a yarmulke/kipah and wear it during the service.  And, do look inside to see if the kipah was specially made for the celebration with the young person’s name and date printed inside. If so, feel free to take the kipah home with you as a lovely keepsake.

During the service you will be given a prayer book, which in Hebrew is called a “siddur.” In modern Jewish services the siddur is printed in Hebrew, English and transliteration, which means that the Hebrew words are written using the English alphabet – allowing you to pronounce the words and sing along with the prayers and blessings if you choose. 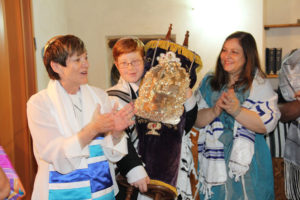 During the service the Bar Mitzvah boy or Bat Mitzvah girl will assist the rabbi. Also she/he will have the chance to carry the Torah scroll through the congregation, bringing it to each congregant. When the Torah comes to you, you may touch it with your fingers or use your siddur (prayer book) to touch the scroll and as some do, then kiss your fingers or kiss the siddur.

When the boy or girl reads from the scroll, family members and friends will be offered honors, called aliyot, meaning that they come up to the bima (altar area) and make a blessing prior to  and after the young person’s reading from the scroll. If you are asked to participate in an aliyah (truly an honor for a family member or friend)  and it’s been decades since you’ve been to Hebrew school, don’t despair and don’t decline the offer.

Most synagogues offer you a large print, “bifocal edition” of the blessings printed in both Hebrew and transliteration, so that you can read the blessings with ease.

Gifts?  The most popular gift for a Bar or Bat Mitzvah boy or girl is the gift of money that is often saved as part of a college fun.  In recent years Bar and Bat Mitzvah students have combined Hebrew language study with community service, organizing a “Mitzvah Project,” designed to make the world a better place. For example, one young man repaired cast off bicycles and presented them to men in a homeless shelter, another raised money to purchase supplies for a food bank, well one young woman collected and distributed used coats to needy  women and girls. For some families a contribution to the Mitzvah Project suffices in place of a personal gift.

Finally a Fun Fact: When speaking about a Bar or Bat Mitzvah you’ll impress those around you if you say,  “Josh became a Bar Mitzvah,” or “Jill will become a Bat Mitzvah,” rather than “Josh was Bar Mitzvahed!” because “bar mitzvah” is not a verb!

What to wear to the Jewish wedding or to the Bar or Bat Mitzvah celebration? For the most part women and girls are asked to dress modestly with shoulders covered, no plunging necklines, open back dresses or micro-minis. For men and boys, a coat and tie is always appropriate or an open collar shirt along with a jacket will work well, too. And when in doubt, ask the family who will be happy to guide you. 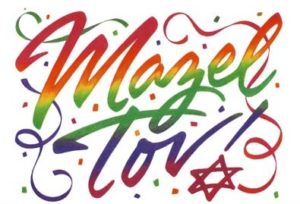 The Jewish wedding and the Bar and Bat Mitzvah ceremonies are joyful celebrations. Share the joy with family and friends and know that in our Jewish tradition, you are blessed for having been a part of these special moments.